Wine is easy to drink to the point that one glass often becomes several. Its smooth flavor profile can disguise the taste of alcohol, so you might not notice the effects until it’s too late.

And as anyone will tell you, overindulging in wine or any alcoholic beverage can have some unpleasant symptoms. When you have a killer headache and an upset stomach in the morning after, you’ll probably regret that heavy wine drinking session.

That’s why it’s a good idea to know how much wine will get you drunk. You’ll be able to stop before things get out of hand. Here we’ll be explaining how much wine it takes to get you drunk, as well as factors that impact your alcohol tolerance.

How Many Glasses of Wine Does it Take to Get Drunk?

The amount of wine it takes to get you drunk depends on a few factors, including the percentage of alcohol in the wine, your alcohol tolerance, and your body weight.

But for the average person, how many glasses of wine does it take to get drunk? For people who weigh under 250 pounds, consuming two glasses of wine within an hour will make you legally drunk.

Blood alcohol content (BAC) measures the amount of alcohol in an individual’s bloodstream. For example, if you weigh 200 lbs and have drunk a single glass of wine, you’ll have a BAC of around 0.04. The more alcohol in your bloodstream, the drunker you will feel.

Generally, you don’t want to go over 0.25. Any more than this and you’re at risk of severely hurting yourself.

How is Alcohol in Wine Measured?

The alcohol level in wine is signified by an ‘ABV’ figure (‘alcohol by volume’), just like any other alcoholic beverage. This measures the amount of alcohol present in a given volume of the drink.

How Much Alcohol is in Wine?

The amount of alcohol in wine is different depending on the type. As a rule, wine can be categorized into one of four groups relating to its alcohol levels, which we’ll be going over below.

The ABV of a wine impacts its taste, with wines with a higher alcohol content having a bolder, oilier taste. Wines with a lower alcohol level usually taste considerably lighter.

Whether wines with higher alcohol content are “better” is purely subjective. Everyone has different tastes. As long as the flavor of the wine appeals to you, then that’s all that matters!

That said, wines with more alcohol in them typically have a stronger and bolder flavor. The higher the alcohol content, the fuller the body.

On the other hand, wines with lower alcohol levels complement foods better. Most restaurants will offer wines with no more than 14% ABV for this reason. Additionally, the lower the alcohol level, the more you can drink without suffering from any ill effects.

Factors That Influence Your Alcohol Tolerance

Alcohol tolerance is the amount of alcohol you can consume before you become intoxicated. Everyone has a different alcohol tolerance based on their body weight, metabolism rate, age, race, and even gender.

If you drink wine every day, you will have a much higher alcohol tolerance. It will probably take three or four glasses of wine before you notice any adverse effects.

Whether you’ve eaten or taken any drugs before drinking wine will also come into play. Eating food coats the stomach and slows down the absorption of alcohol.

Additionally, your body size will also have an impact on how much alcohol affects you. An individual with a smaller body size is likely to experience the effects of alcohol to a greater degree than someone with a larger body size.

Alcohol metabolism rate is the rate your body is able to break down alcohol. This rate varies from person to person, but the average is between 170 to 240 mg per day for an individual who weighs 154 pounds This equates to one alcoholic beverage per hour.

Your alcohol tolerance improves the more you’re exposed to drinking and the older you get. An individual who has never drunk before will get drunk much quicker from less alcohol than someone who regularly consumes alcohol.

GARD suggests that alcohol sensitivity is most prevalent in East Asian individuals. This is thought to be due to a sequencing issue in the DNA that prevents a specific part of alcohol from breaking down properly in the body. The result is a more heightened physical reaction.

Studies have shown that women become more impaired than men after drinking the same amount of alcohol. There is also evidence that implies women are more at risk than men of organ damage and trauma related to alcohol.

In the event that you drink on an unfilled stomach, you will effectively become tipsy.

In such a case that there wasn’t any food in your stomach when you have wine, then the alcohol content will rapidly pass into your digestive system, making you ingest it rapidly.

On the other hand, if you previously had a very heavy meal, the wine you drink will have a much smaller impact and you’ll need much more of it to get drunk.

Be that as it may, assuming you are drinking while you are eating, you will have a high possibility of getting drunk since you didn’t have food during the day.

While this may sound surprising, it is another one of the important elements when talking about alcohol tolerance.

Just like your weight in general, the more muscle mass you have in your body and the less you will get intoxicated.

In fact, muscles are 75% made of water which will eventually absorb and weaken the alcohol content in wine.

What Are the Symptoms of Being Drunk?

As you drink wine, the alcohol makes its way into your bloodstream and affects your body functions and brain. Drinking excessive amounts of alcohol will drastically slow down your brain and body functions.

Symptoms associated with being drunk include:

The effects of alcohol will be stronger the more alcohol you’ve consumed. If you’re extremely drunk, it can be very dangerous, causing symptoms like dehydration, vomiting, seizures, injuries, and even death.

It’s important to know the signs of being drunk so you can stop drinking alcohol before you harm yourself even further.

There are seven stages of inebriation, and it’s important to understand each stage to keep yourself safe during a wine-drinking session.

If you’ve consumed one or fewer alcoholic beverages in an hour, you’re considered sober or low-level intoxicated. You should feel normal during this stage.

You’ll start to feel euphoric after you’ve drunk between 1 to 3 drinks within an hour (1 to 2 for a woman, and 2 to 3 for a man). This is more commonly known as being tipsy. You might feel more outgoing and talkative but have slower reaction times.

In the United States, a BAC of 0.08 is the legal limit of intoxication while driving. You can be arrested if your BAC is higher than this while driving.

A man who has drunk 3 to 5 drinks or a woman who has drunk 2 to 4 drinks within an hour is considered intoxicated. During this stage, you might experience mood swings, becoming easily excited or upset.

You might also suffer from drowsiness or exhaustion, alongside vision issues, loss of balance and coordination, and poor judgement calls.

The confusion stage is the result of drinking more than 5 drinks for a man and more than 4 drinks in an hour for a woman. At this point, you might find it difficult to stand and move around.

You might be extremely emotionally unstable and have a severe lack of coordination. Additionally, you might be confused or unsure of your surroundings, have a higher pain threshold, and dip in and out of consciousness. You might even blackout altogether.

Once your BAC reaches between 0.25 to 0.40, you will be unable to stand or walk properly. You might be unresponsive to your surroundings, pass out, and lose the ability to control your bodily functions.

You might have pale or a blue shade to your skin and have difficulty breathing. During the stupor stage of intoxication, you might suffer from vomiting, which can be dangerous as you won’t have control of your gag reflex. This could lead to choking.

If you have any of these symptoms, it’s crucial you seek emergency medical attention.

At this level of drunkenness, your body functions will have slowed down to the point that you will slip into a coma. This can be fatal, and you will need emergency medical care.

With a BAC of 0.45 or above, you are at serious risk of dying from alcohol intoxication. Around 88,000 deaths each year are caused by drinking excessive amounts of alcohol.

How Do You Figure Out Your Alcohol Tolerance?

The best way to find out your alcohol tolerance is simply by experimenting. First, pick a safe area to drink like your home and ask a friend or family member to help keep an eye on you for the duration of the test.

Pour yourself a couple of glasses and consume them over an hour. Keep a note of when you first started feeling the effects of being tipsy, such as feeling euphoric or dizzy.

If you don’t feel anything after two glasses of wine, pour another glass of wine and repeat the same step as above. Once you start feeling drunk, stop and think about the number of glasses you’ve consumed. That’s your answer!

Why is Knowing Your Alcohol Tolerance Important? 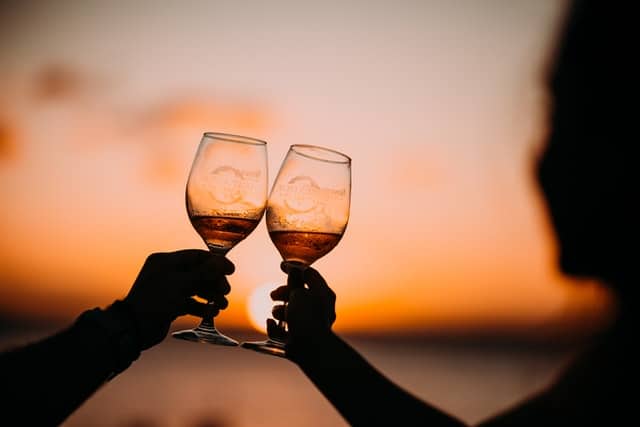 Knowing your alcohol tolerance is important as you’ll be able to acknowledge when you’ve reached your limit.

The effects of alcohol can often sneak up on you. One minute you’re chatting the night away with friends, and the next minute the room is spinning and you’re stumbling all over the place.

Understanding your alcohol tolerance will allow you to cut the drinking session short before the night takes a turn for the worse.

For example, if you know you get inebriated after four glasses of wine, you’ll be able to stop before things end badly.

Even if you plan to continue drinking after you’ve reached your limit, the unpleasant symptoms of intoxication won’t be as surprising as you’ll know you’ve drunk more than you can handle.

As delicious as wine is, it’s important to know your limit so you can keep yourself safe. Drinking too much wine can lead to some serious consequences, especially if you overindulge in a short period of time.

As we mentioned earlier, the average person can drink 2 glasses of wine within an hour before they are considered legally drunk. However, your body mass index, age, gender, metabolism rate, and other factors such as the ABV of the wine will influence your alcohol tolerance.

While it’s fine to drink wine in moderation, make sure you don’t overdo it. It’s not worth a headache and upset stomach, or even worse, a trip to the hospital.